What a man needs in gardening is a cast-iron back, with a hinge in it.
~Charles Dudley Warner, My Summer in a Garden, 1871
A little while ago a reader asked if I’d post some photos of my garden. What a great idea! As it is the beginning of fall here, I thought I may have to dig for some old snaps, that the garden today was mostly too tired looking, but I grabbed the camera anyway and snapped a few. The results are not too bad, there are still several plants blooming, so here they are. Just to give you an idea of what can be done with time, a not-so-cast-iron-back and a passion, I’ll include three photos of the garden way back 23 years ago when the ideas and transformation began.


A badly neglected yard. I can’t call it a garden at this point…it’s all grass and weeds with a few overgrown shrubs. It is spring of 1986. 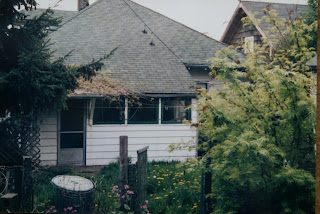 After some major clean-up, you can see it is a small urban size lot with a house and detached garage. 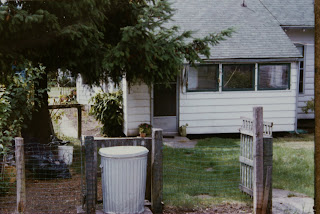 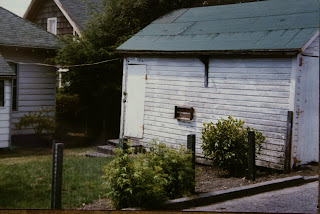 It is fall of 2009. The neighbors call it an urban oasis. 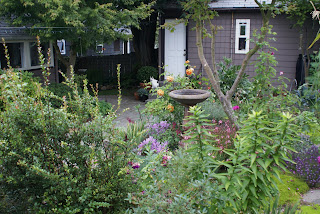 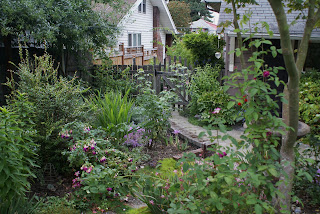 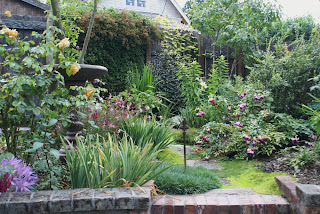 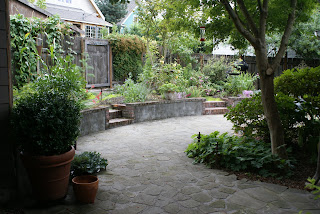 These last two are of the same location: one current and the other with ‘Miss’ was taken in spring when the wood hyacinths (Hyacinthoides hispanica) are at their peak. 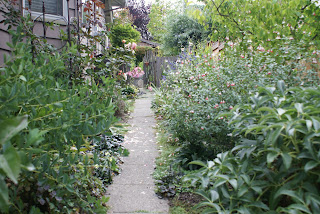 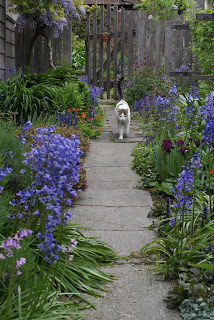 So there is a good portion of my garden, where I’ve had some of my most relaxing, enjoyable moments as the reward of the transformative effort.


Photographs taken by and property of the author
at 2:09 PM 2 comments

I know that if odour were visible, as colour is, I'd see the summer garden in rainbow clouds.
~Robert Bridges, "Testament of Beauty"
The Abyssinian Glad is blooming now. Is it a glad or not? Formerly Acidanthera now re-named as Gladiolus callianthus, you’ll find both names still used in catalogs adn package labeling. Old House Gardens says of it’s history, “ collected from the mts of Ethiopia in 1844, it was featured as brand new in Garden and Forest in 1888.
I’m not particularly fond of the standard garden glads….too stiff like soldiers only to flop to one side with the weight of the flowers. They always seemed to need staking, which I don’t like to do, so I got rid of mine long ago.
Then last year I came across the Abyssinian Glad in the Old House Gardens catalog. They look nothing like the regular glads. I couldn’t resist the promise of fragrance and the promise they never need staking.

Fragrant? YES! It is wonderful. So much so that the Old House Gardens newsletter had a “name that fragrance” write-in last year. Submitters used words like…
"Perfumey," Alexa said, "Like lilac, with a touch of . . . ?"
"Honeysuckle," Renee suggested, "lilac and honeysuckle . . . and maybe forsythia?"
"Forsythia? What does forsythia smell like?" everyone asked.
"I love this scent," Jessica said, "but I can't describe it."
"I can't even smell it," Scott lamented.
“A delicate jasmine”
“They smell only like Abyssinian glads! I know of no other fragrance quite like theirs. All I need do is step out of my front door and their scent reaches me from 50 feet away.”
“Definitely an angel-trumpet-type fragrance (Datura), perhaps tending a bit toward its relative, Brugmansia. “
“...smell like Easter lilies."

Enough said to convince you to try them? I am at a loss as to a comparison…perhaps wisteria? Nontheless…they are wonderful. If you want fragrance to greet you in your garden (I’m not sure about 50 feet away though) you simply must try them. Put them on your bulb buying list for next spring, when they hit the stores. My first ones were mail order but sadly didn’t survive last winter which was especially cold here. I’ve also seen them at the Pacific Northwest Flower and Garden Show in Seattle, as well as Fred Meyer (aka Krogers) when their spring bulbs come in. They bloom in late summer, are hardy to USDA zone 7 so may or may not winter-over where you are. I’ll buy them as annuals if necessary, they are that wonderful.

Tulips and Other Spring Bulbs

If of thy mortal goods thou art bereft,
And of thy meager store
Two loaves alone to thee are left,
Sell one, and with the dole
Buy hyacinths to feed thy soul.
--Saadi, Persian Sufi poet, in Gulistan (The Rose Garden), 1258


I know tulips should be a spring subject but now is the time for you to choose and plant your bulbs that will bloom in spring. Tulips are known for not being long living bulbs. Unlike the daffodil, tulips will often peter out after a few years. It’s not your ineptitude as a gardener; it’s usually just the nature of the bulb. If you want your spring bulbs coming back year after year, most garden writers suggest daffodils rather than tulips. That said however, I have had daffs bloom beautifully for 2 springs only to have them totally disappear after that. Experts will say I must have voles, moles or squirrels who are the culprits. Well, squirrels will dig them up from the surface, which is easy to spot…so that’s not my problem. I’ve never seen mole hills in my yard and I have no idea about voles but I suspect not them either. I do know daffodil flowering decreases as the clumps grow and get crowded. That’s not my problem here either as crowded clumps would have a mass of leaves. In that case dig them up after the foliage has died completely back, divide the clump and replant, spreading the joy in more areas of the garden. Garden experts WANT to give you an answer (too wet, too warm, too cold, too deep, too shallow or critters), but sometimes I think the answer is simply “that’s just the way it goes with some bulbs”. Simply move on, buy more and don’t get the same one next time. Well of course I did try the same again…and lost them too. Several years ago I was enamored with the white petal, greenish cup daffs. I bought several varieties, all of which were delightful the first year only to disappear forevermore. (sigh) Happily though, the super fragrant Erlicheer daffodil has come back spring after spring. The mildly fragrant Thalia continues thus far and Tete-a-Tete has been a faithful miniature returning too. I love poeticus, the short deep colored cupped narcissus with white petals, notably the Narcissus poeticus “Pheasant’s Eye”. Alas, after 2 years they have left me as well.

But I am undaunted! I have turned my attention to other spring blooming bulbs like Muscari (Grape hyacinth), Hyacinthoides (Spanish bluebells) both of which “self seed, spreading rapidly”. Ooh, bad news in my garden so I deadhead them, foiling their “irrational exuberance”. I’ve also planted Fritillaria meleagris (checkered or snakehead lily -I like the purple ones), Fritillaria michailovskyi (pictured here), Crocus, Hyacinths (which also slink away as the years wan), Galanthus nivalis (snowdrop), Erythronium ‘Pagota’ (trout lily), and Tulips.

So getting back to tulips, abit more than 7 years ago throughout the garden I planted 100 Tulipa “Gavota”. It is a beautiful long pointed burgundy tulip with yellow edging. As of now I have maybe a dozen left as they slowly disappear. Originally I bought a bag at Costco. Now I can only find them on-line at just a few sites, at a much higher price of course. I would love to plant another 100 Gavota. It’s amazing how put together a garden looks when color or texture is repeated throughout. Seven years and counting of longevity doesn’t seem too bad…does it?

I recently discovered another email newsletter adding it to my list of favorites. It’s by Ken Druse, entitled Real Dirt and in his latest edition he writes, “…That said; one bulb in the garden hasn't failed me yet. It is a late-season heirloom tulip I bought from Old House Gardens [www.oldhousegardens.com] called 'Insulinde'. The petals or tepals are striped or flamed purple on white. In 2009, the blossoms lasted - from bud to tepal drop -- an astonishing four weeks! And this is a perennial plant returning every spring as large and strong as the previous year.”

I almost forgot to mention the species tulips. Much smaller, some don’t even look like tulips but I have Tulipa turkestanica, they are so sweet. Tiny in size by comparison to today’s standard tulips, they close up at night and open by day also, but they don’t abandon the garden over time. There are several varieties to choose from. Mine came from McClure and Zimmerman (mzbulb.com) I think.

Now about those dying bulb leaves. Yes, you must leave them intact to wither even though the flower has dropped off. It is through the leaves that the bulb is fed and strengthened for next spring’s flowers. If you remove them before they have withered you are starving the bulb. For 8 weeks or more after the flowers are finished, the leaves will continue to grow and produce food for the bulb. If you tie them in a knot, band them or braid them they will not only look silly, you are also reducing the amount of leaf surface the sun and air can access. Also, be sure to deadhead after the flowers fade so the energy can go into the bulb, not seed head production. If you simply cannot leave bulb leaves to die naturally in your garden, perhaps you shouldn’t include bulbs in your plantings.

Speaking of critters… if you ever see your crocus petals just laying on the ground…that is squirrels! I’ve watched them, with their front ‘paws’ pick off the petals, turn them over, nibble something delectable from the base, drop the remainder 0f the petal to the ground and proceed likewise through the whole patch! Apparently my buttery yellow crocus taste better than my purple ones. Sheesh!

So it’s September!! The spring blooming bulbs are in the stores, nurseries and catalogs now just waiting to be snuggled down into your dirt for the winter! 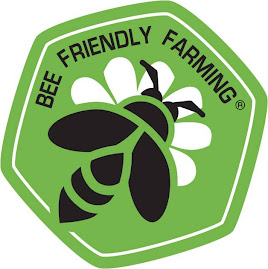